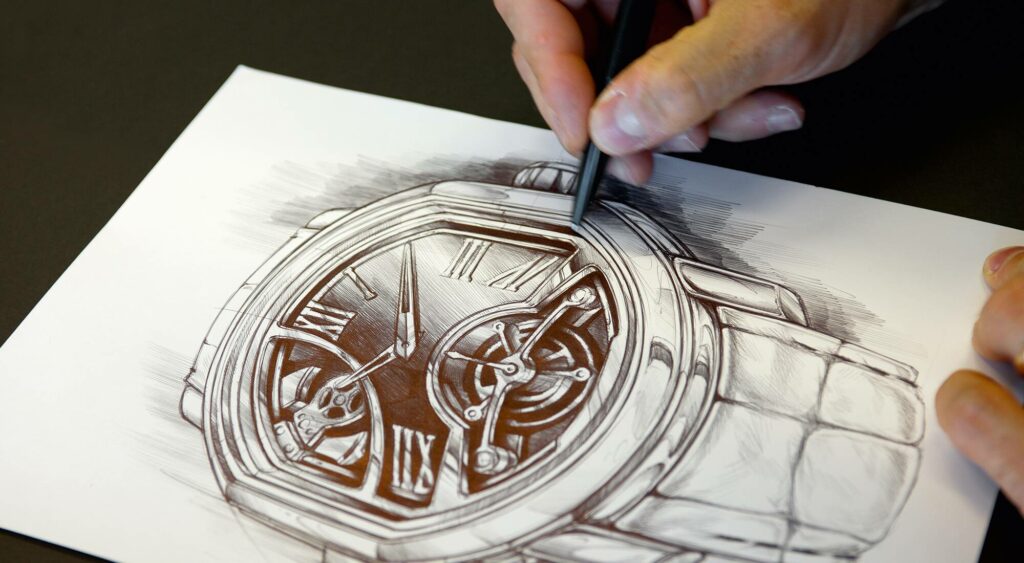 Bulgari: history and success of an all-Italian brand

The company founded in 1884 by Greek silversmith Sotirios Boulgarious is one of the most important contemporary luxury brands and Rome established itself as the centre of its early and current popularity. 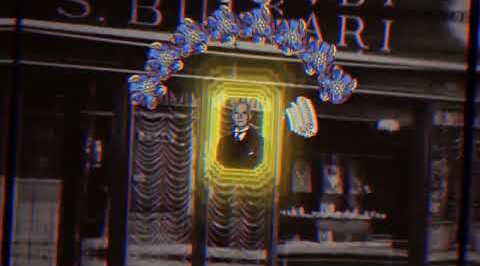 The commercial events of Bulgari’s early days marked the opening of several shops in the capital, first in Via Sistina and later in Via Condotti. The link between Sotirios and Italy prompted the entrepreneur to change his surname to Bulgari, making it decidedly more Italian. This decision foreshadowed the founder’s desire to ideally link himself to the classical Greco-Roman world, a cultural suggestion that would influence his creations through unique and unmistakable design.

The years of the brand’s Italian commercial penetration coincided with the spread of the Art Nouveau style. Although very popular throughout the old continent, the interest in archaeology and classical revivalism remained marked in Italy. During the same period, the ‘garland’ style, very common among the leading jewellers of Europe, became established, characterised by jewellery unmistakably adorned with ribbons, diamonds and pearls. Inevitably, this transalpine style also influenced the first jewellery creations and the very insignia of Bulgari boutiques where it reads: “Artistic silverware, antiquites, bijoux and curiosites“. The decision to borrow this aesthetic canon in fashion, combining it with that of classical derivation, gives an international character, a melange between Italian and French that marks a sophistication of the brand.

Bulgari: the search for a dream world and the years of consecration

Adopting a dialectical approach to Art Deco, Bulgari works on the formal recognisability of its creations: more massive, with cabochon-cut stones that recall simple geometric shapes like those used in classical decorative and architectural compositions.
It begins that process of searching for a dreamlike world, typical of the brand, which draws inspiration from an observable context, such as Roman ruins, and alludes to a return to an order far removed from the formal exuberance offered by Art Nouveau.

With the opening in 1934 of the remodelled boutique on Via Condotti, Bulgari consolidated the thriving commercial scene represented by a prestigious local and international clientele of industrialists, aristocrats, creative types, politicians and actors. The Latinised ‘Bvlgari‘ sign, still well preserved today, is a clear and further homage to the classical period. 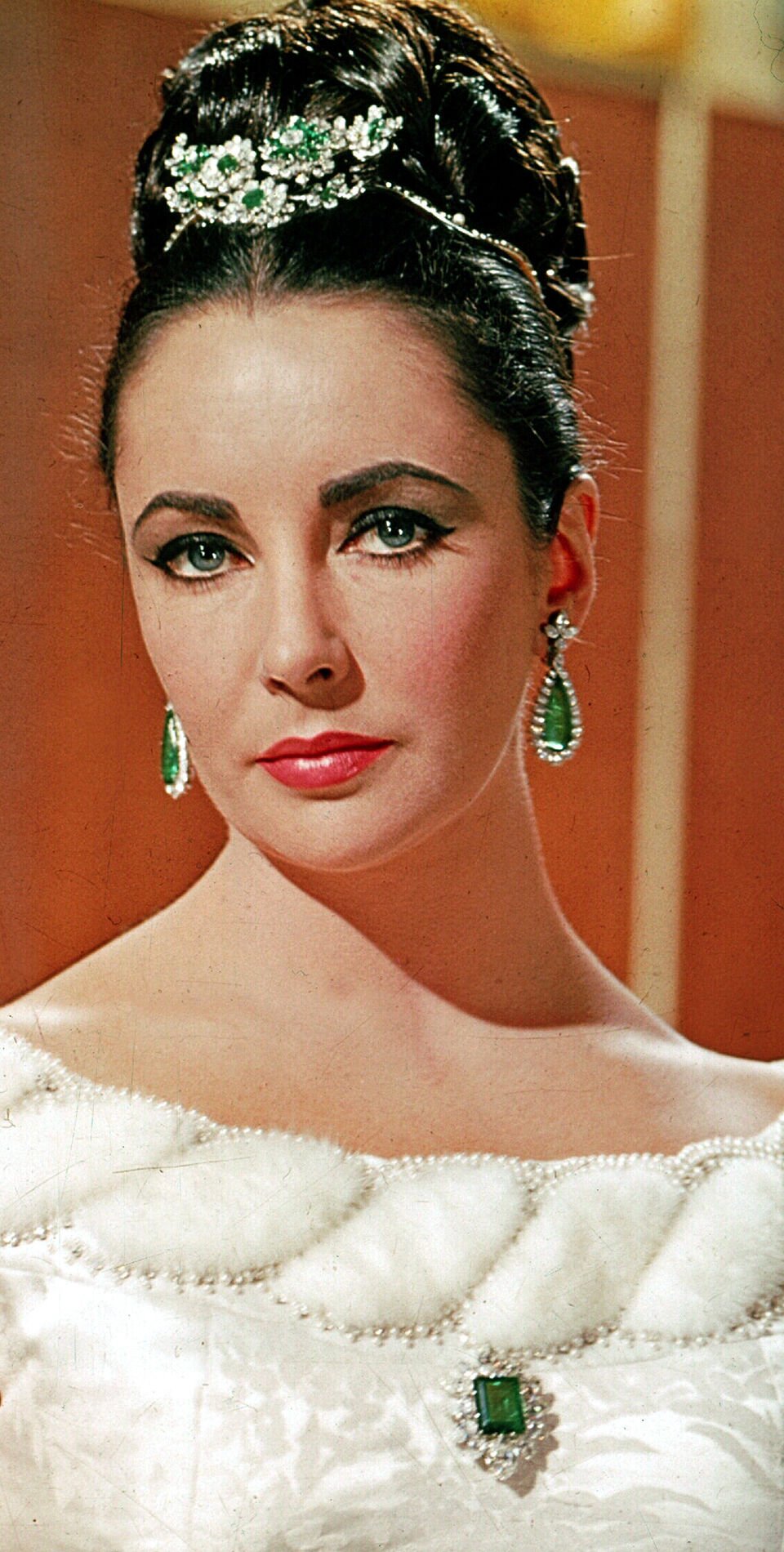 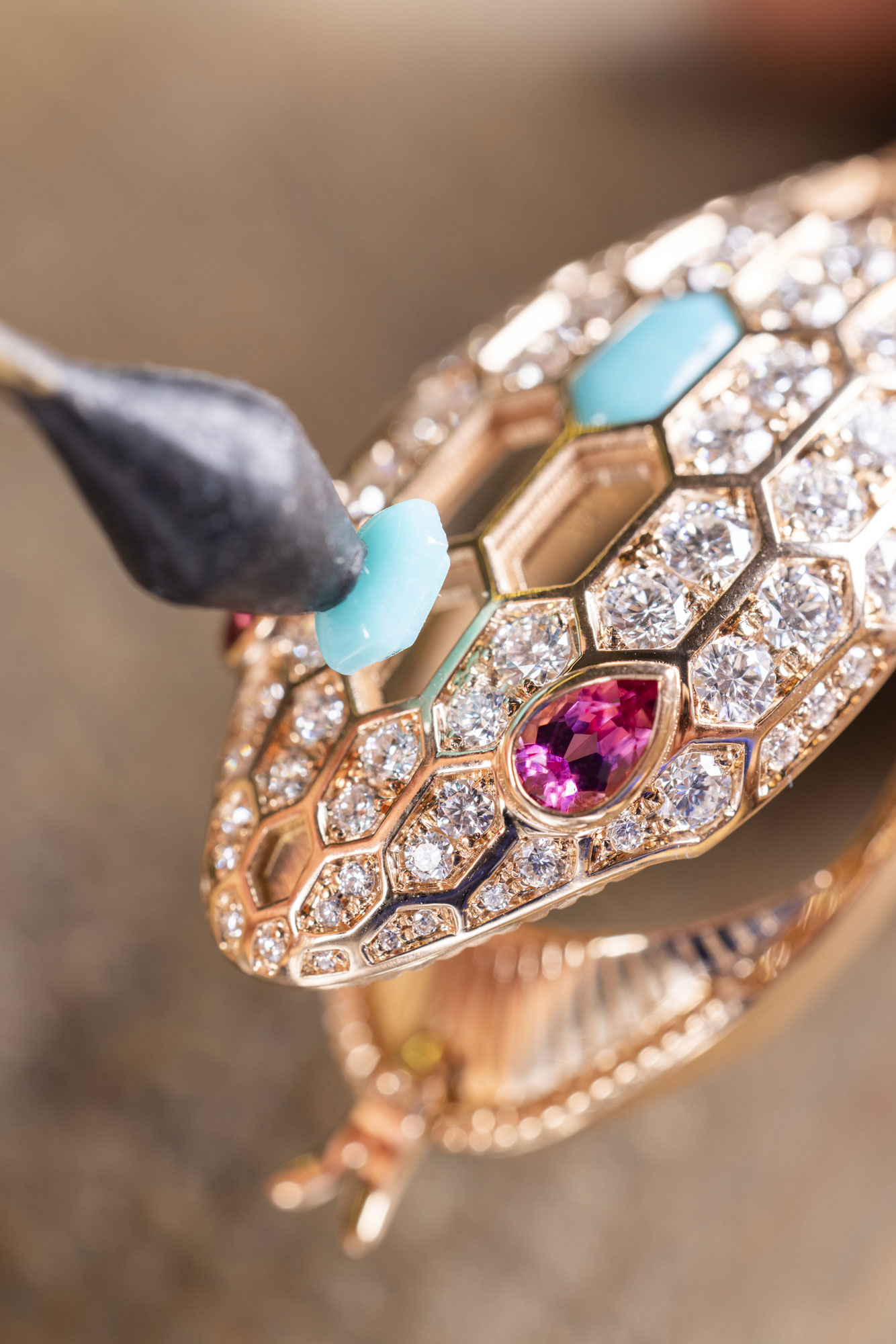 Alongside the production of silverware and jewellery, the production of watches became established from the 1920s without, however, the presence of an in-house manufacture. The movements of the brand’s first timepieces of the time were supplied by the best mechanism manufacturers.

While the first production sees the creation of sober brooch or pocket watches, the second offers the more ecclectic creation of snake-shaped bracelets with the timepiece placed on the reptile’s head. For more than eighty years, the watches in the ‘Serpenti’ line have built the brand’s iconic image in women’s watchmaking. Although already present as a subject in late 19th century jewellery, it was proposed by Bulgari as an element linked to the Hellenistic-Roman world, as a symbol of wisdom, life and eternity, to be worn as an ornament or talisman.

This iconic model was declined with enamel work, different shades of gold and the snake’s head often replaced by an extravagant fantasy of shapes and dials.
The progressively more stylised snake has been equipped over time with Audemars Piguet, Jeager Le-Coultre, Vacheron Constantin and Movado movements, visible in their names on the dials accompanied by the Bulgari brand name.

Close to the shapes of the ‘Serpenti‘ model, the ‘Tubogas‘ model represents, with its flexibility and sinuosity, a unique model that can also be declined in many qualities of gold. The same element can give shape to bracelets, necklaces and watches.

In addition to the classical symbolism of the serpent, Bulgari’s quest for formal character also passes through the singular design of ancient architectural forms; an example of such inspirations is the ‘Amphitheatre‘ model, which with its concave case and flange recalls the shapes of the terraces of a Roman amphitheatre. 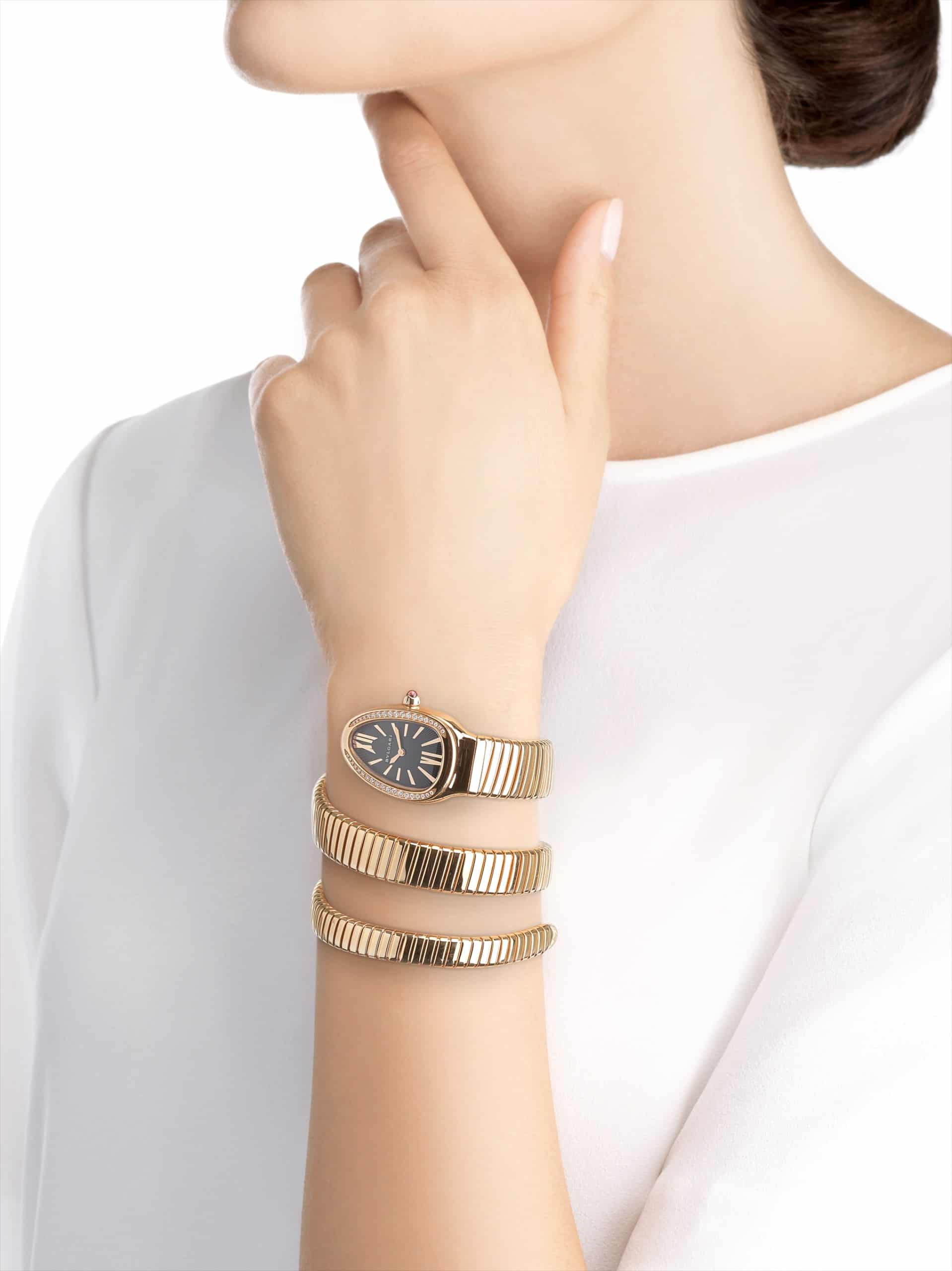 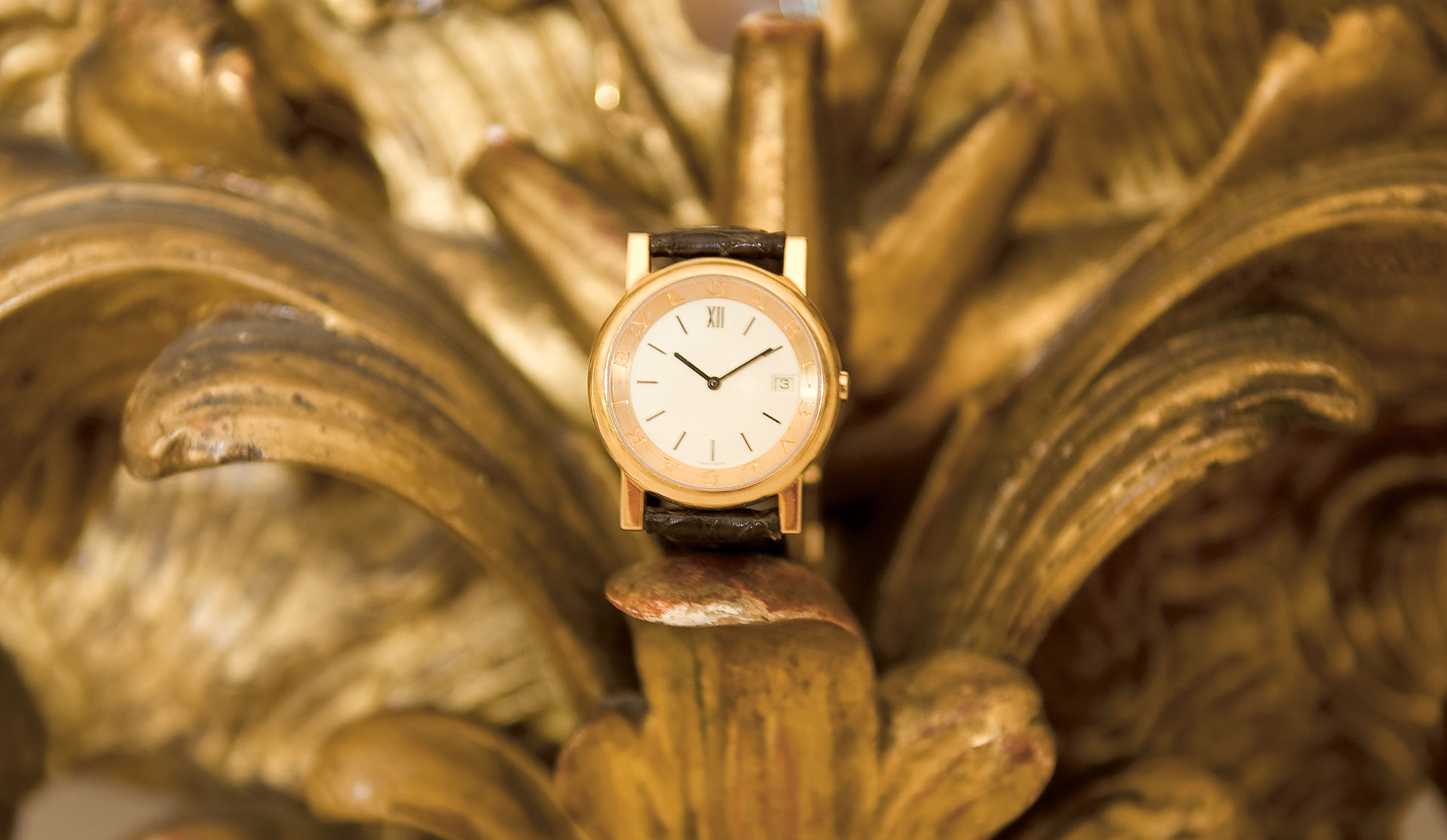 The brand refines its aesthetic-formal cornerstones with jewellery of marked volume and fundamental geometric shapes. The three-dimensional development traces a design process similar to that of architecture. Concave and convex elements, which characterise stones and watch cases, are found in the cabochon cut that is a clear reference to the dome, and elementary shapes such as the circle and the square trace the plans of buildings or their stone decorations.
These formal characteristics contribute to the production of objects that are always original, independent of the various aesthetic influences that follow one another through the ages.

The aesthetics of the Bulgari brand

In all these creations, yellow gold remains the Bulgari brand’s favourite material, always harking back to classical tradition and emphasising the value of the gems set.
The combination of the colours of the different metals and especially the stones, will be the other pivot on which the brand’s aesthetic proposal will rest. All these characters will participate in the determination of a unique and recognisable character, capable of determining itself as an alternative to the other luxury brands of the time.

It was perhaps in the 1960s that the Hellenic-Roman genius loci was fully manifested through the production of jewellery adorned with ancient classical coins set inside necklaces, brooches, bracelets and rings. The distinctiveness of these jewels is the definitive consolidation of the Bulgari style in continuity with the founder’s origins and the experience of his business history. 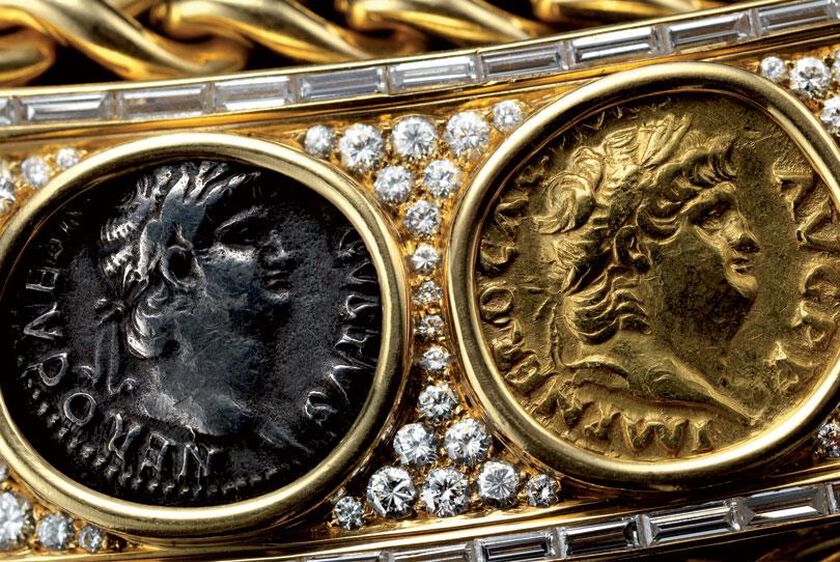 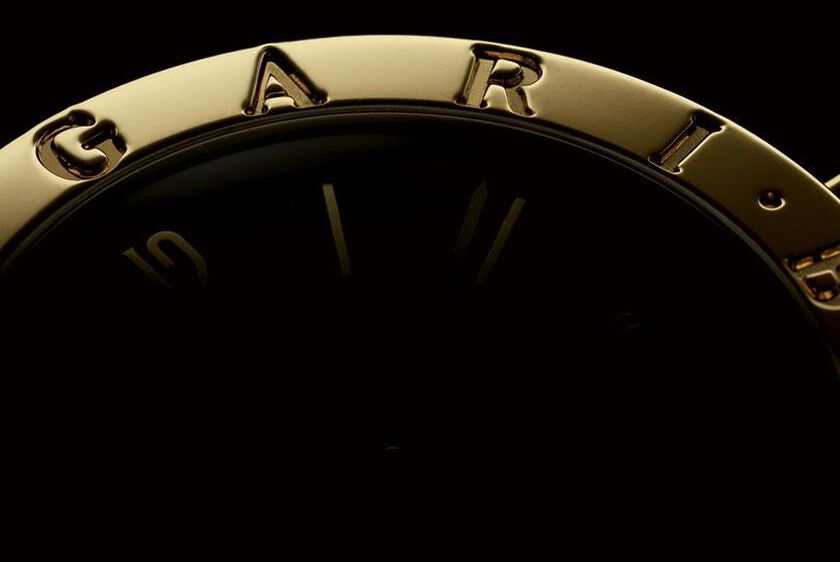 Bulgari watches and jewellery: confirmation of the contemporary

From the late 1970s, Bulgari watchmaking became increasingly important thanks to the birth of Bulgari Time, a Swiss company dedicated to the production of increasingly sophisticated timepieces. The manufacture was given the task of building movements ever closer to the quality standards typical of Swiss maisons, initially sharing the know-how of Girard Perregaux.
1977 saw the birth of ‘BVLGARI-BVLGARI‘, the company’s best-selling, most versatile icon in terms of materials, complications and dials.

The classical approach in composing different shapes will be useful for the creation of the ‘Parentesi‘ line, in which one recognises an orderly repetition of straight and curved lines, which require no other ornamentation. Modularity makes it possible to create bracelets, earrings and necklaces consistent with the character and style of the brand. 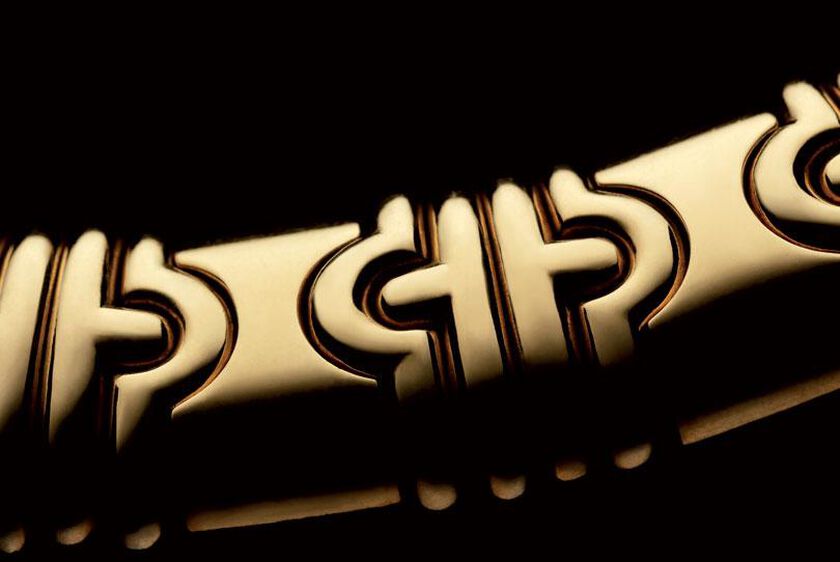 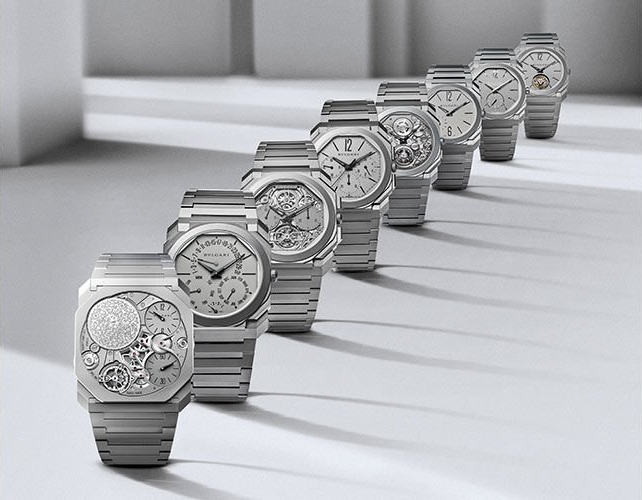 Even in contemporary times, Bulgari’s watchmaking is guided by the same principles: “Octo” perhaps best represents the new frontier of Bulgari style.
The shape of the timepiece draws inspiration from pure, clear-cut, classical forms that overlap, creating a harmony of symmetries that are more architectural than design.

“Octo” is an object with a straightforward and recognisable character, such that it has become a new icon in men’s watchmaking. The ever-increasing number of variants and complications is indicative of the commercial success of this collection. With Octo, Bulgari also challenges the limits of technology, introducing innovations including the record-breaking ultra-thin Octo Finissimo.

Just 1.8 mm thick in the case and 1.5 in the bracelet, the Octo Finissimo Ultra is the latest model to be presented by Bulgari after collecting a series of thinness records and international awards for its design over the past decade. A new world record is thus set, the latest stage in a decade-long story of a model that over the years has adopted a number of technological innovations with new patents characterising timepieces in different materials, from titanium to steel to ceramic.

Bulgari is still strongly rooted in the classical aesthetic universe, the entry into the LVMH group has only opened up new horizons by making the brand even more international and developing its full potential. The opening of new hotels under the Bulgari brand and the production of sophisticated objects, in addition to jewellery and watches, signal a desire to express a wide-ranging idea of luxury that is faithful to its values and therefore recognisable worldwide. 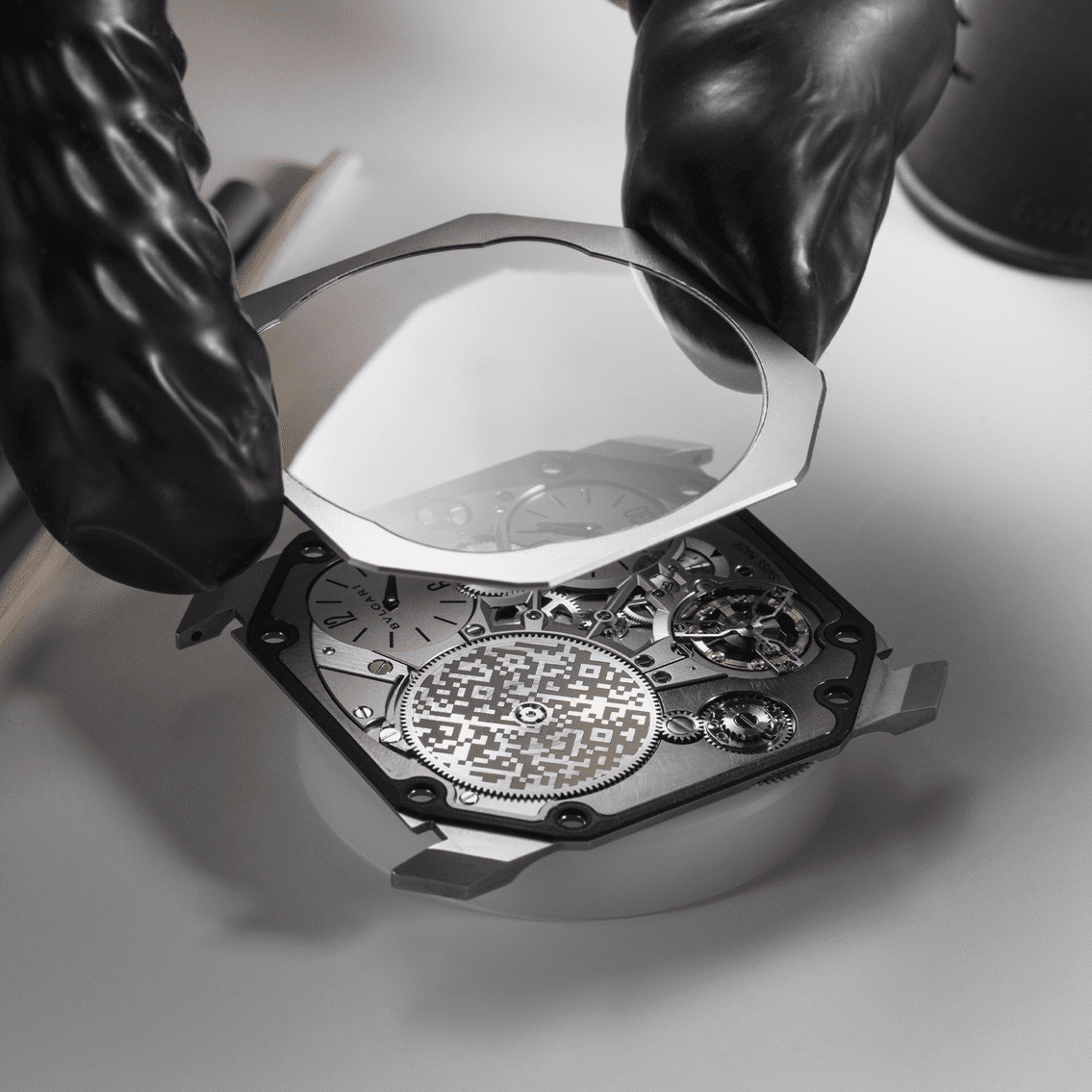