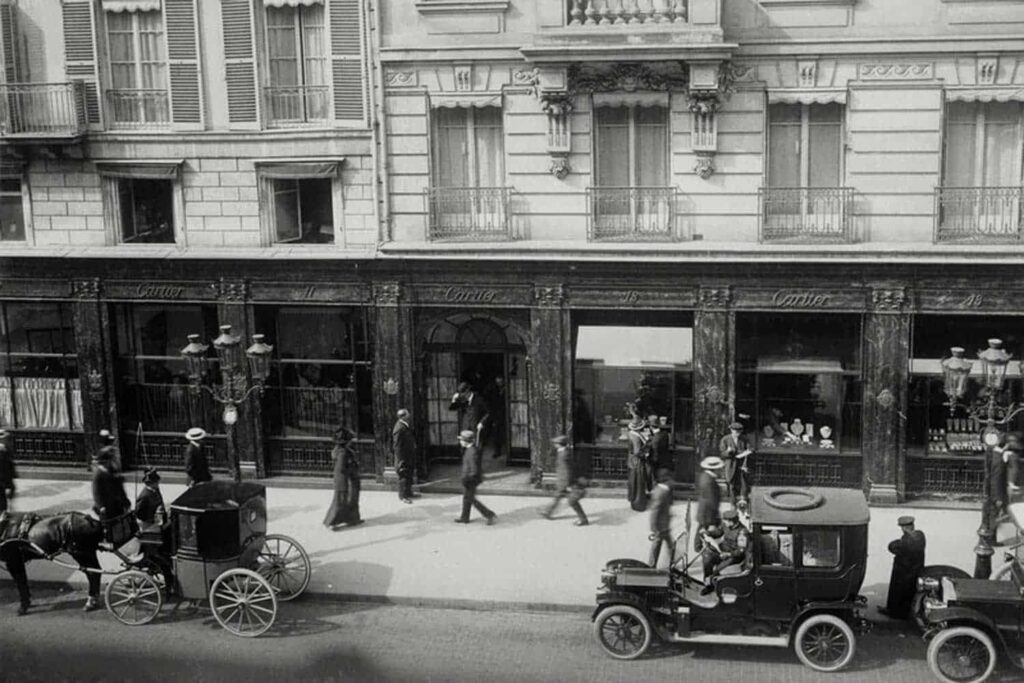 Cartier: the history of the ‘king of jewellers’ brand

More than 170 years of history, enough to consolidate the myth of one of the richest maisons in terms of creativity and precious production.
The shop inaugurated by Louis Cartier in 1899 at 13 rue de la Paix in Paris appears as a space of great magnificence, a useful reference point for the international elite made up of nobles, emperors and newly rich English, German North and South American families.
This prestigious shop is the result of fifty years of growth from a small atelier opened by grandfather Louis Francois Cartier for the Parisian bourgeoisie and the court of Napoleon III.
With their institutional ceremonies, gala balls and gifts between families, the French and then European nobility would give the brand the visibility on which Cartier would base its success, so much so that Edward VII would call Cartier the ‘King’s Jeweller and King of Jewellers’.

Louis himself was to be the creative mind of the company, surrounded by excellent draughtsmen such as Charles Jacqueau and later by the refined and resolute Jeanne Toussaint.
The international allure was consolidated with the opening of the London office in 1909 at 175 New Bond Street and New York in 1917 at 653 Fifth avenue, giving the Maison an international scope in collaboration with Louis’ two brothers.
In addition to increasing jewellery production, the three brothers’ objectives included creating more table clocks, wristwatches and ultimately developing the mechanics of timepieces in their own workshops. 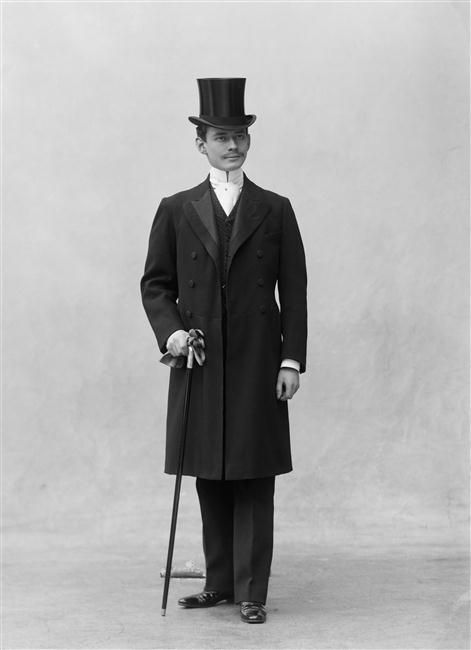 Cartier between watchmaking and jewellery

The interest between jewellery and watchmaking would make Cartier an example of continuous syncretism between the two artistic-technical areas; the masterpieces of mechanics required to follow the increasingly eclectic and refined forms had to combine with the decorative demands of goldsmithing. This continuous creative tension, accompanied by excellent craftsmanship savoir fair, was to produce astounding aesthetic results by the early 20th century that still leave their mark on modern collections today. 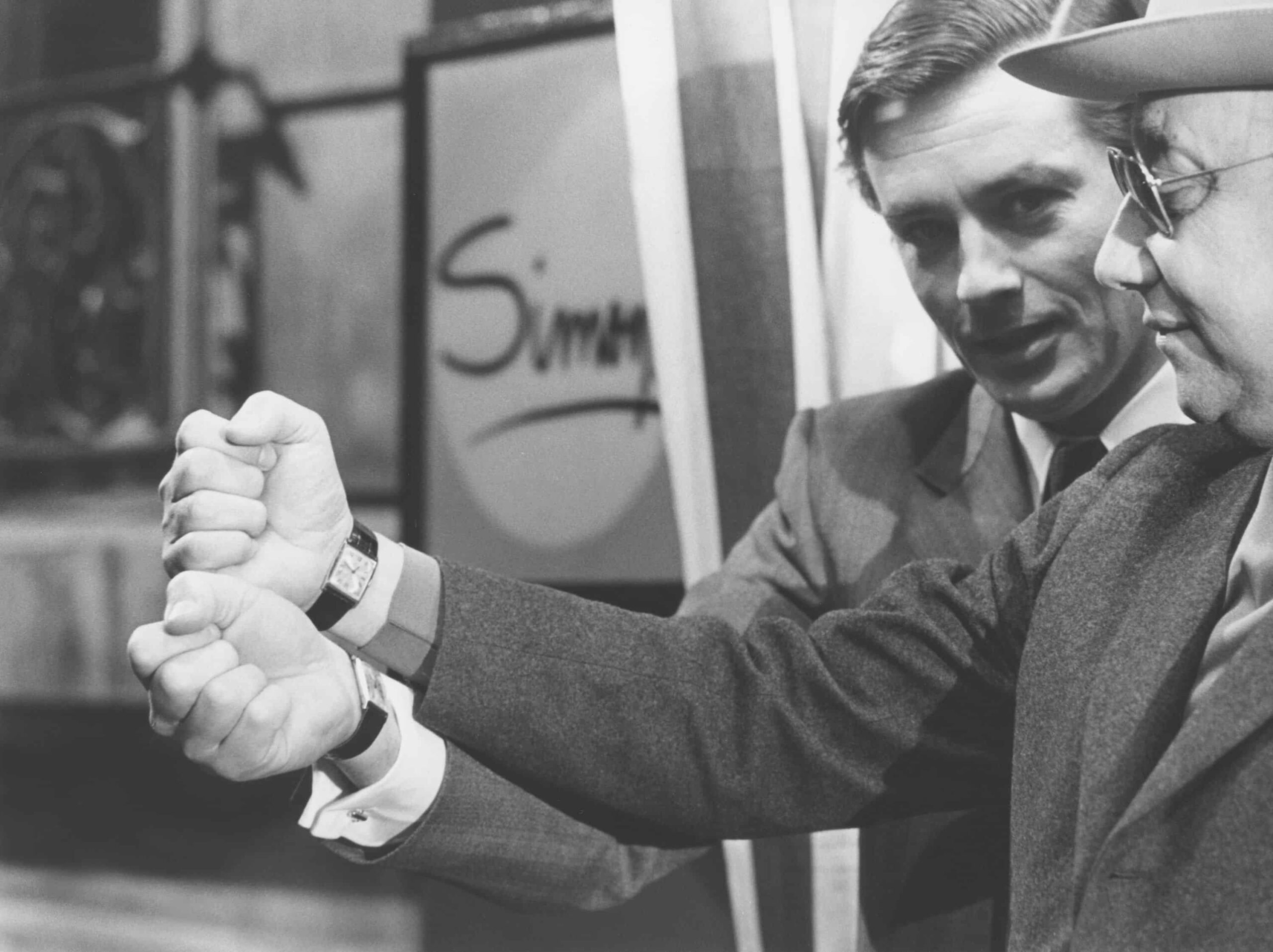 Fashion trends, with their extravagances, do not affect the soul of Cartier, which has always gone along with them, using them as creative cues but remaining faithful to its own style, its own artistic vision. Jewellery, luxury accessories and watches start with simple shapes, enriched with functional details to evoke an idea, a world or a culture. In watches, it is the case that is the object and subject of continuous updating, the daring design becomes a hallmark of the Maison.

The most iconic Cartier watches

The Tank of 1919 and the Santos of 1911 are two striking examples of this.
The first was the result of formal suggestions referring to wartime atmospheres combined with the aesthetic fascination of the machine. The architecture of the case sees the two side bars mimic the shapes of the tank tracks first used by the Allied army during the First World War.
It is a very recognisable timepiece, able to vary with additions of the goldsmith’s art, without ever losing its character.

The Santos model, on the other hand, considered to be the first elegant wristwatch (the story of the first wristwatch in history is still debated), is inspired by the first person who inspired it, the sportsman and pioneer Alberto Santos-Dumont. He wore it on his wrist (as the first prototype) during an air speed competition he won in 1907. The timepiece is powered by a Jeager movement. It is thanks to this Maison collaboration that a winning combination of technical solutions adaptable to particular shapes is realised.
Tank and Santos, with their popularity, became iconic objects, true icons capable of encapsulating a fragment of an era and, at the same time, transcending the historical context and meeting contemporary aesthetic taste. 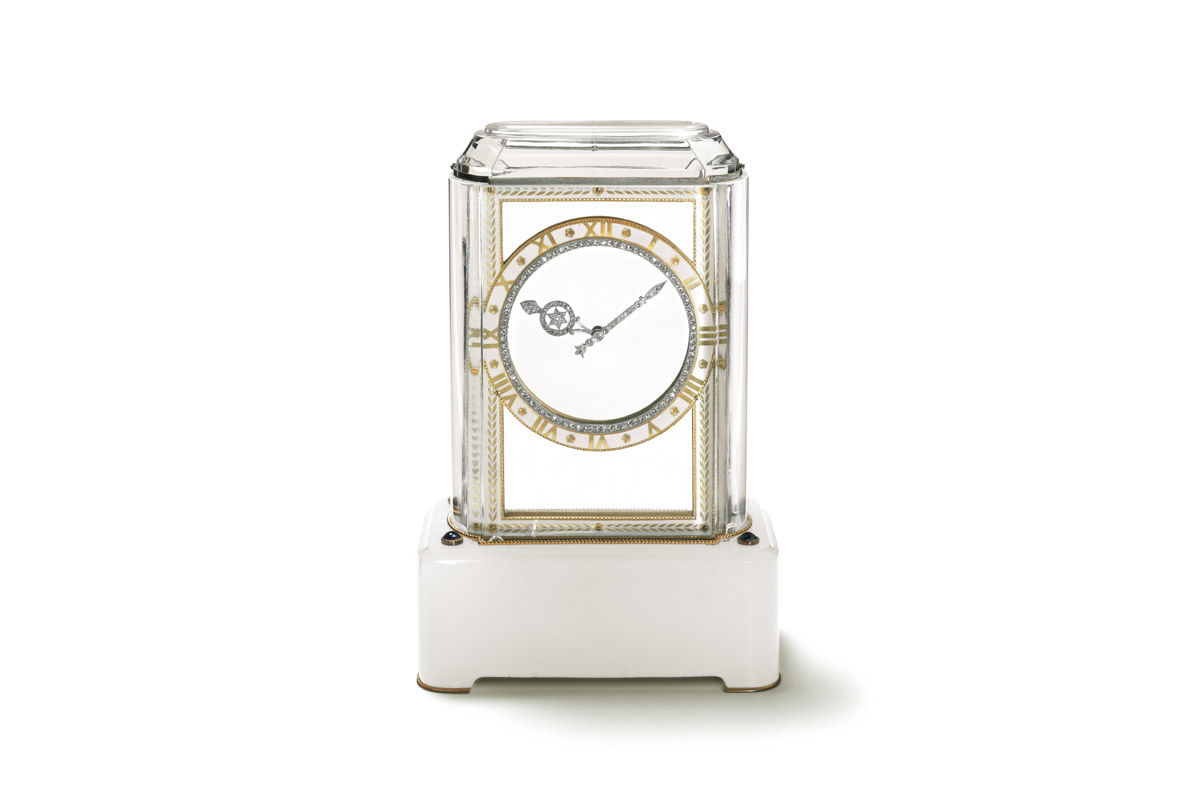 The constant tension between the world of jewellery and that of watchmaking gave rise to the creative experimentation of the Maison’s ateliers, highlighted already in the earliest works by the originality of the shapes, the harmony of the colours and the accurate use of enamels, competing in preciousness with Fabergè products. The first pendulette mystèrieuse, a necessaire de Bureau, dates from 1913, one of the creations that best express Cartier aesthetics with original material and compositional experiments: the hands mounted most often on jade or quartz discs seem to float in the void.

The new elite of the Belle Epoque demanded refined jewellery capable of experimenting with less academic forms, pushing the goldsmiths’ workshops into constant experimentation without ever following the new formal oddities of Art Nouveau tout court. 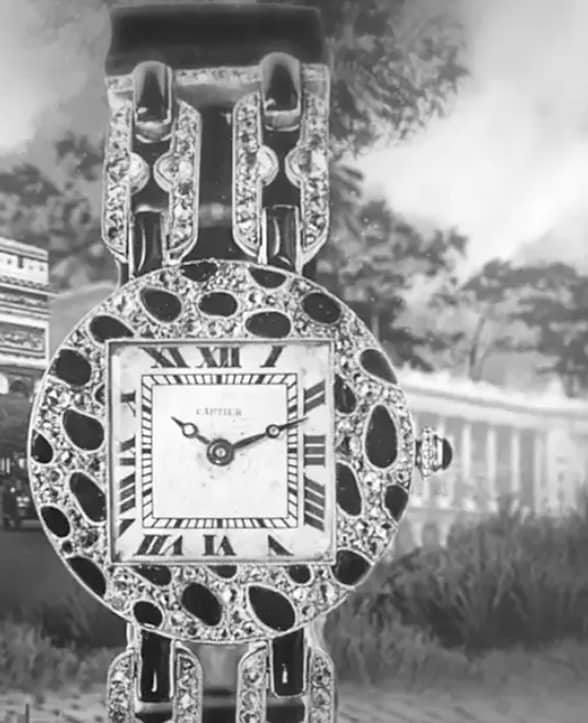 The design of Cartier jewellery at the turn of the century is still influenced by traditional stylistic codes such as the Louis XVI style known as “garland” made of laurel leaf wreaths, hearts and eighteenth-century-inspired ribbons. With the hidden signature of Charles Jacques, the Cartier Maison moved from the retro style to formal and compositional explorations linked to the near and far East.
On the wave of the exotic suggestion, the animalier character is consolidated. The brand’s most representative zoomorphies take shape, such as the iconic panther with its unmistakable coat drawn on a ladies’ watch entirely finished in onyx and diamonds. 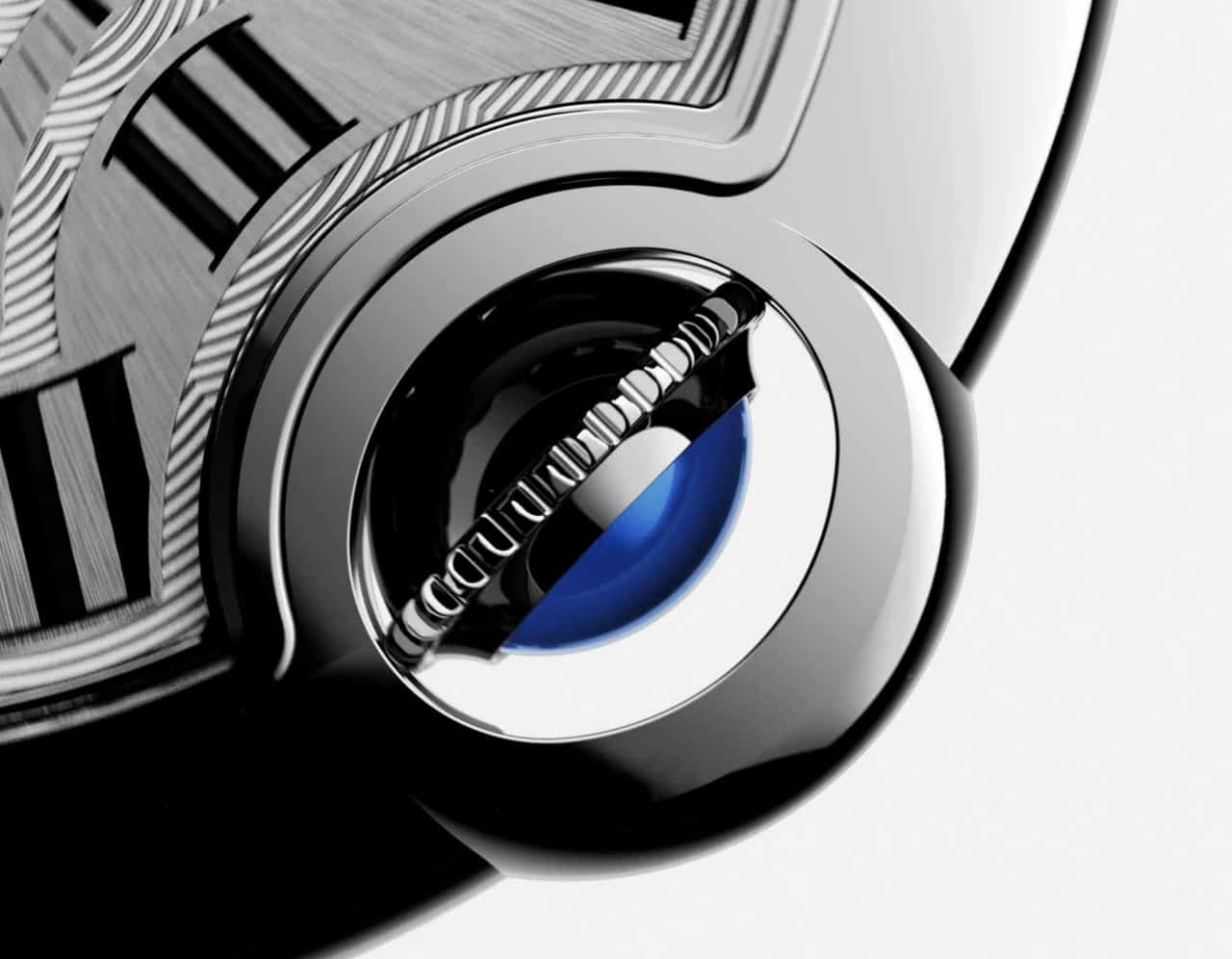 Already on this timepiece, one notices an essential detail for many Cartier watches: the winding crown is transformed from a mere functional element into an elegant cabochon-cut midnight blue sapphire detail. This contamination between precious and timepiece would define Luis Cartier as both a jeweller watchmaker and a watchmaker jeweller, an artistic-craft syncretism between aesthetic and technical research, where the watch loses that more austere character always delineated by the great Swiss productions.
It was also during this decade, which was generous with iconic creations, that the logo of the crossed double C was consolidated while on a watch and in 1910 the folding clasp known as bouclé déployante was proposed.

The period from the end of the First World War to the Wall Street stock market crash would be described by Francis Scott Fitzgerald as the Crazy Years. Paris would from this time be at the centre of a cultural and artistic growth that would involve Cartier in the Deco, the last example of a unified style in the history of art.
It was during these years that the production of wristwatches surpassed the numbers of pocket watches due to their greater wearability, this ‘practical’ aspect was certainly influenced by the frenetic approach to life that characterised the early post-war period, the so-called vivre vite.
This period saw the introduction of the Pasha model (although different from the recently reissued one) and the Vendôme model with its characteristic articulated central loop attachments.
The clock is contaminated with many everyday objects such as fountain pens, inkwells, letter openers and the unmistakable desk alarm clocks. 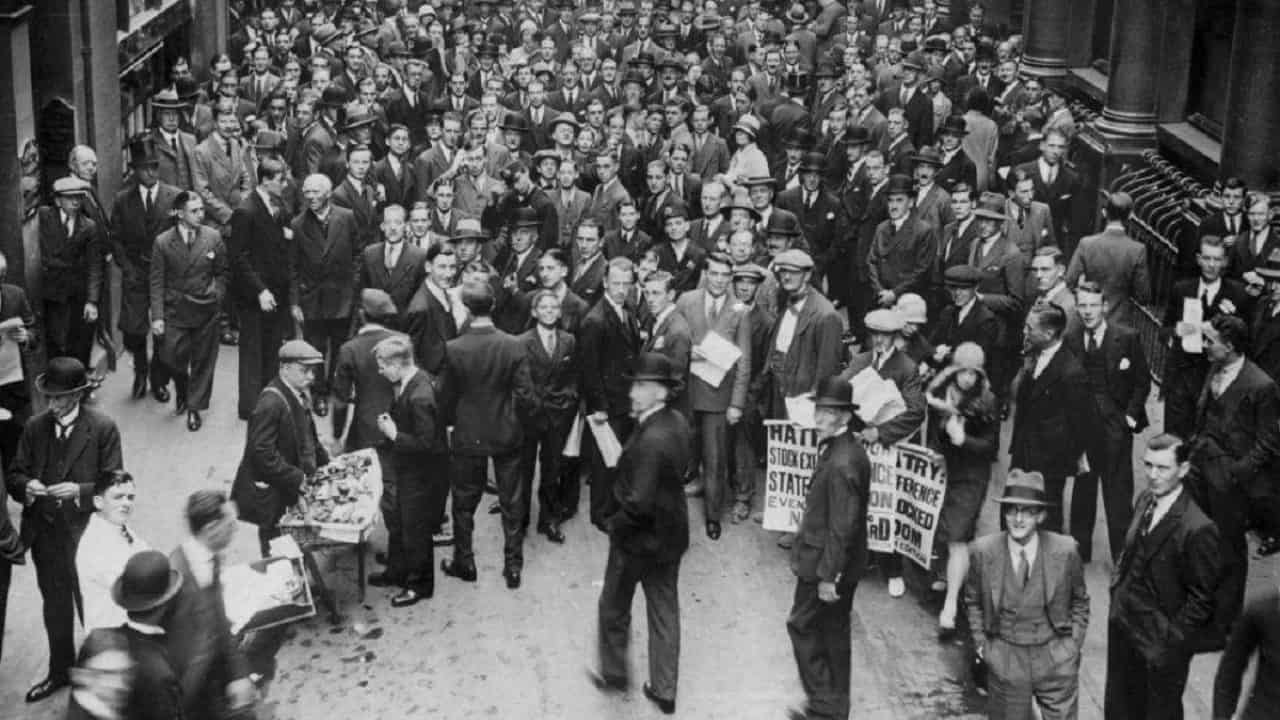 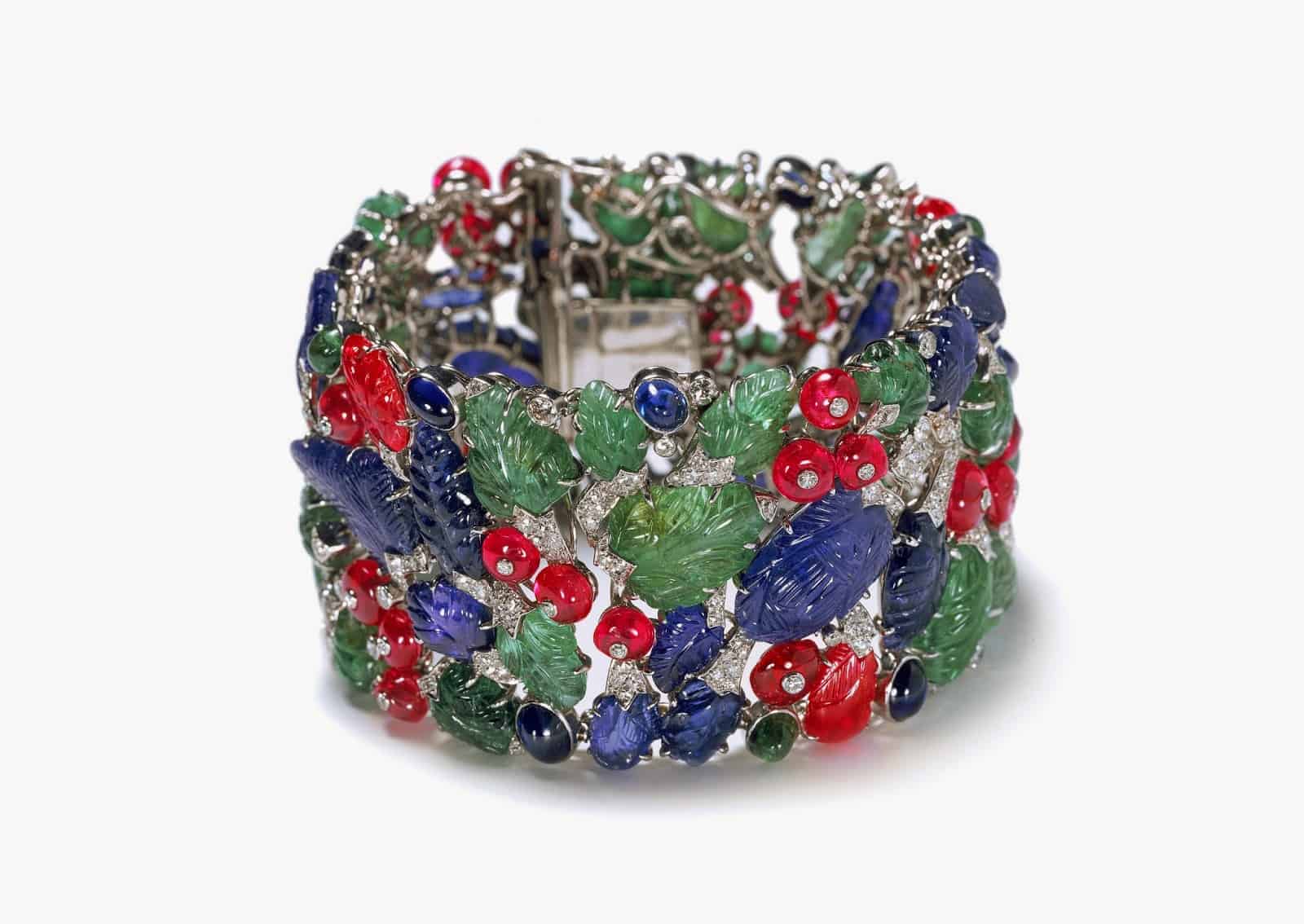 In jewellery, creativity is found with the invention of a bracelet resembling a flexible tube with rat-tail links useful for creating bracelets, necklaces and straps.
With the post 1929 economic crisis, Cartier differentiated its products, leaving more room for the production of less expensive ones.
The crazy years came to an end with the iconic ‘Tutti Frutti’ bracelet of 1929, which created an innovative composition with diamonds, emeralds and sapphires, with stylised elements and vibrant colours.

The rediscovery of gold in the 1930s managed to set a trend among jewellery lovers and during the war years, the difficult supply of precious stones did not stop the creativity of the maison, which was able to replace diamonds, rubies and emeralds with semi-precious stones without renouncing its ever-renewed quest for naturalistic shapes. The stylistic influence of Jeanne Toussaint as creative director of the maison from 1933 to 1970 dates back to these years. Under her guidance, the Maison’s zoomorphic stylistic motif, the panther, was consolidated with the brooch named Panthere, commissioned by the Duke of Windsor in 1949. The feline is in platinum totally covered with brilliants and blue sapphires and is set on a large cabochon sapphire weighing over 150 carats. 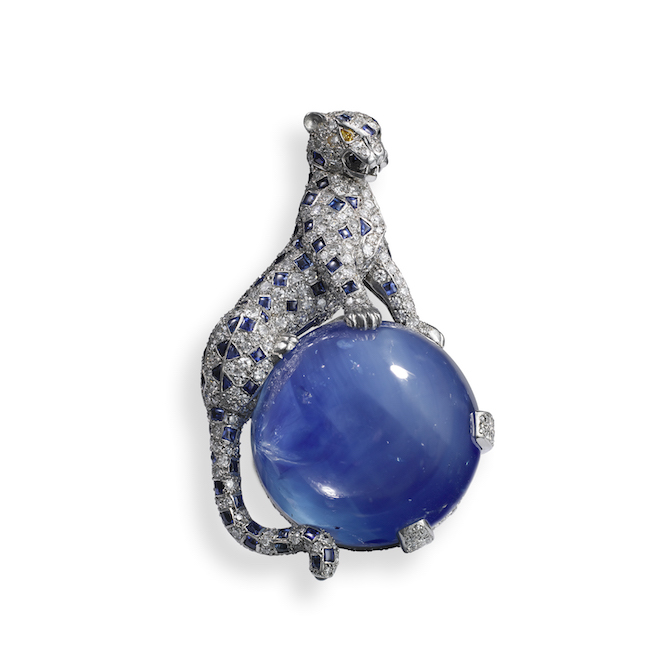 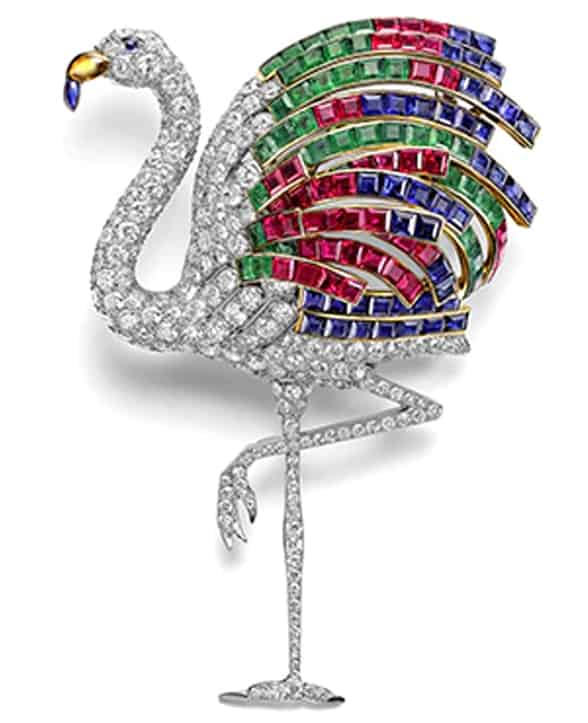 The Flamingo brooch also continues the aesthetic and exotic fascination initiated by Louis Cartier and Jeanne Toussaint and explores Asian and African atmospheres. The 1940 jewel in platinum is a flamingo set with diamonds, sapphires, rubies, emeralds and citrine.
These precious jewellery pieces maintained a formal research in floral and faunal themes that amazed for the originality of the aesthetic and technical results, so much so that it was difficult to date them precisely because they were not contaminated by the fashions and trends of the different eras. In the 1960s, production for the Hollywood jazz-set continued, with scandal magazines always active, as did the Cartier workshops producing limited editions and customisations of the most varied objects and accessories.

From 1972, the Maison passed into the hands of international financiers who would guide it towards a further expansion of its clientele. Objects would appear that would ‘liberalise luxury’ such as the Must de Cartier lighter of 1988. The creation of the Must de Cartier line would be the driving force behind that renewal made up of re-editions of historical models such as the Tank.
In 1973 Cartier took an important step: the in-house production of mechanical movements. These were years in which luxury lived on visual impact and the iconic Santos competed with the popular Rolex. The commercial success led to the definition of production focused on jewellery watches, the so-called montre-bijoux, and more classic watches, called montre-function, in line with the great Swiss productions. 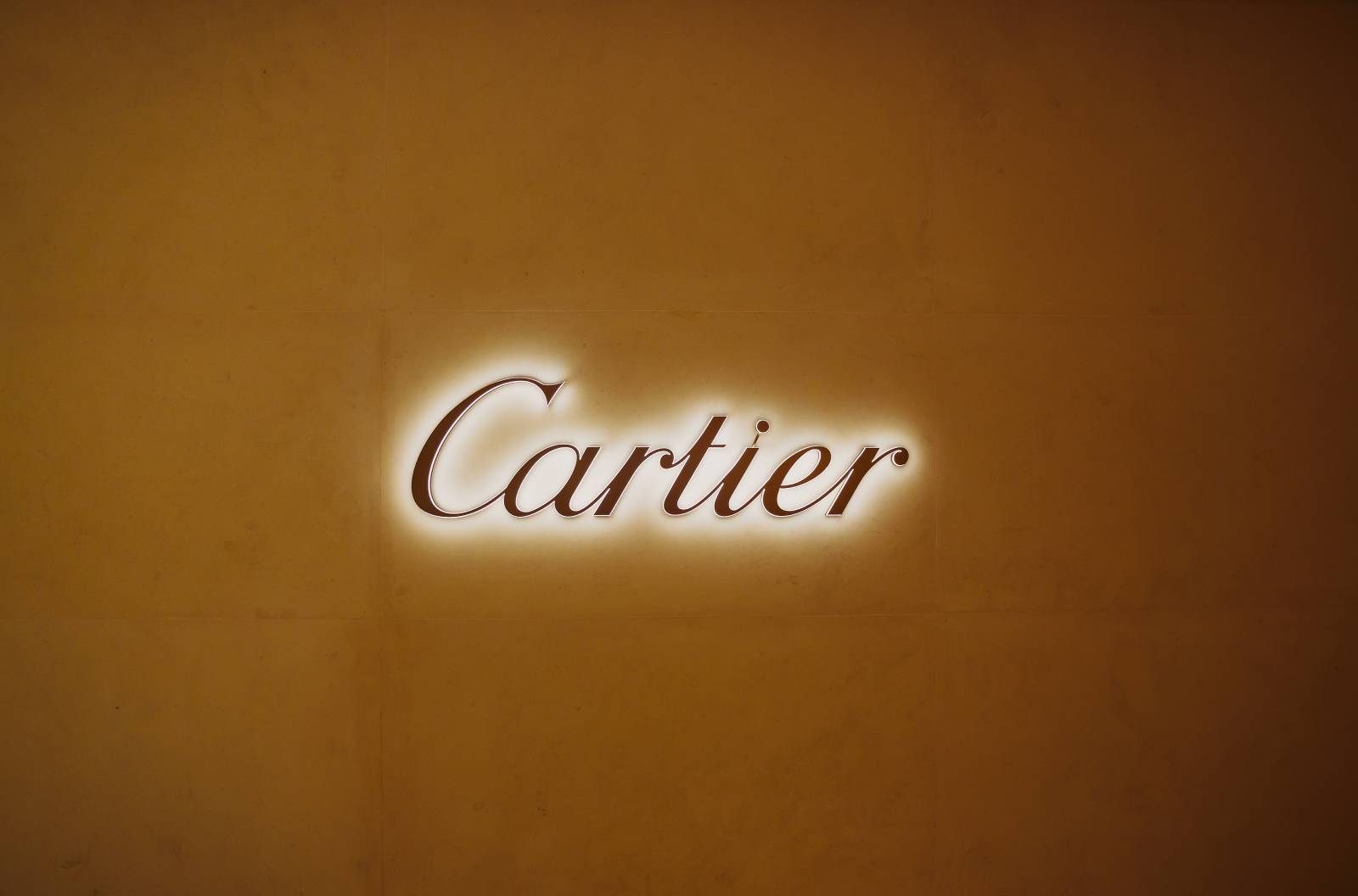 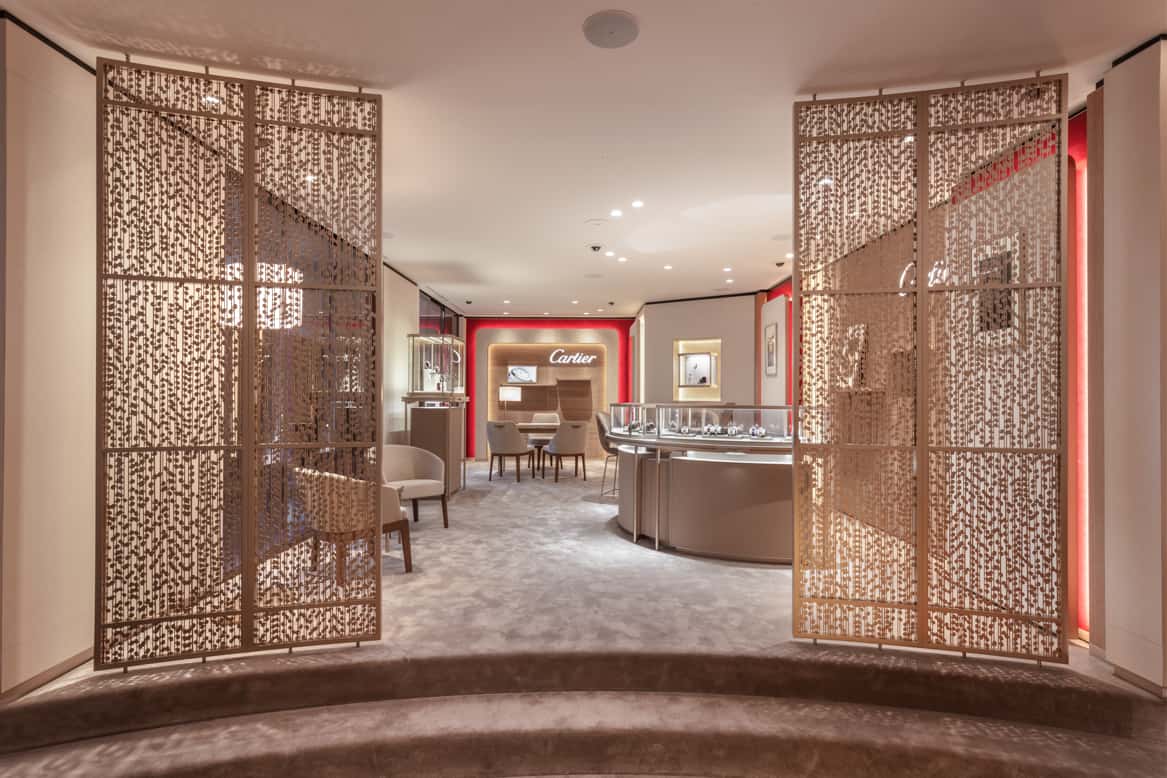 Today, Cartier has over two thousand boutiques on five continents where one can find exclusive creations, along with objects inspired by the Maison’s vast artistic-archival heritage. These jewellery pieces are distinguished by their belonging to the Olympus of the decorative arts, and have become objects of veneration and study precisely because of the archetypes that have defined a history with legendary traits. This distinctive approach, with its own aesthetic-formal code, makes Cartier a brand that best embodies “l’art d’etre unique“.
It is therefore no coincidence that Pisa Orologeria has assigned Cartier a space that best enhances its spirit and celebrates a long and fruitful relationship of mutual trust.